The annual the 17th JPHMA Congress was held at Setagaya City Hall in Tokyo on Fri 11 and Sat 12 November 2016.
This congress is the biggest event for homeopathy lovers, including homoeopaths, homoeopathic students, member of Homoeopathy Toranoko (an association for homoeopathy users).
It is an academic congress to learn updated lectures, present outcomes of their activities, praise each other’s studies and a pleasant opportunity to renew old friendships among homoeopathic companies.
Dr Rosina Sonnenschmidt who is a heilpractiker and an ally of Dr Torako Yui, the congress president, was invited as an oversea guest from Germany to this congress.
Although it was heavy rain in the morning, it became a clear sky by the registration time and the hall was packed with participants gathered from all over Japan. Bamboos and wild flowers with a flavour of Japan were decorated everywhere of the venue, creating ‘Homoeopathy in Japan’ beautifully.

Ms Keiko Matsuo, a council member of JPHMA declared the opening for the congress, followed by singing national anthems.

Dr Torako Yui, the congress president gave Greeting address. “It has passed 20 years since I started to diffuse homoeopathic treatment that stimulates self-healing abilities. When I look back, I am convinced this activity was right. ‘Humans have self-healing ability. We can be independent.’ I think these beliefs are important. I have never regretted about starting this work. I think that humans are an existence of a trinity, soul, mind and body. I heartily believe that homoeopaths should be able to treat not only a disease but also mind and soul. Thankfully, the Ministry of AYUSH, government of India is supporting our activities. We also have a guest speaker, Dr Rosina Sonnenschmidt, from Germany where Hahnemann’s birth country. Having such great supports from India and Germany that have strong connection with Japan, let’s succeed this congress by us who are making efforts in curing clients. Let’s exchange our cases at this congress!”
Dr Yui tossed the earth ball from the stage, all participants passed it over till the end of the row and went back to the stage for her to catch it.
This catch ball means that we aim at future that everyone on the earth connect hand in hand, wishing blessings of homoeopathy to be spread not only in Japan but also in the world. It gave a bright energy to the venue and participants were more excited to this congress.

The other speakers on Day 1

Dr Yui has led various intractable diseases to be cured by the Zen homoeopathy that she formulated. She emphasises the importance of correcting food environment in order to deal with modern food-related problems, not relying on homoeopathic remedies only.
It is needed to understand the current situation of food for this purpose. She pointed out that glyphosate chelates particular body essential minerals and induces the mineral deficiency. It also seriously effects on human bodies, being connected with various diseases. Glyphosate is widely used for not only food but also for vaccines and daily products. She suggested homoeopathic remedies as a countermeasure and introduced Nippon TOYOUKE Natural Farming that aims at growing natural vegetables with plenty of minerals.
She showed a case of a girl who suffered from celiac disease with strong allergy to gluten in wheat affected by unnatural food and conventional drugs.
Her mother said that the girl was not only cured from the colic and tantrum but also had a confidence about herself as she could stay at home alone and be confident among other children by the Zen homoeopathy that approaches body, mind and soul as a trinity.
The mother also worked on healing her own inner child and started to chant Heart Sutra and Shinto prayer every day. Since then she had various wonderful awareness and changes of her sorroundings.
She became able to overlook herself who used to blame for not being capable whatever she did. She said that her longstanding impotent feeling and despair were solved as soon as she received a message from Dr Yui. It was a wonderful case to show surrounding environment could be changed to a good direction if a mother changed. 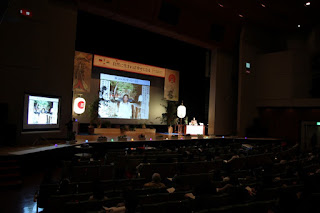 Another case by Dr Yui was a case of mother whose son had serious cerebral palsy and was told that he had no hope to be cured by conventional medicine. The mother still kept nursing him without having a decent sleep. Regardless of her devoted nursing, he passed away. In the middle of deep sorrow, the mother kept blaming ‘if I could have steadied down more.’ ‘If my family member could have supported us.’ Dr Yui was resonant with her sorrow, console and advised her to change her view on his death to spiritual way in order to work on her spiritual purpose in this world little by little.
The mother broke down crying by Dr Yui’s deep message. When she understood the meaning of his birth and death, heartfelt gratitude was born within her. She had a courage to be positive.
She promised to love herself unconditionally and live with heart and soul to repay what her son taught her through his death. She says that she feels so happy to an ordinally thing in her life. Her big awareness taught us what is really important for our mind. 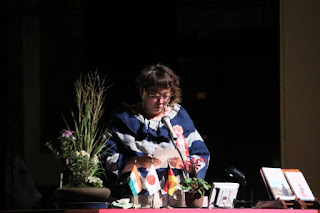 Testimonial: My 6 years with my son who suffered cerebral palsy.
What I want to tell you.
Dr Yui’s client

The mother shared her experience after the presentation by Dr Yui.
She said that her days of many hardships for nursing her son transformed into wonderful time by various affectionate words from Dr Yui.
She told that we could feel gratitude to everything what happen to us if we could change our view to spiritual way. Such hard thing occurs one after another because a deity wishes us to grow our souls. She became able to understand in this way.
She feels comfortable about living by changing her value. After she changed, her family also changed. She is nor regarding her time with her son as a valuable. She also said that changing Heart Sutra and Shinto prayer help her to console herself and feel comfortable.
Her tearful testimonial with gratitude to Dr Yui was very inspiring. Participants were also moved to tears. 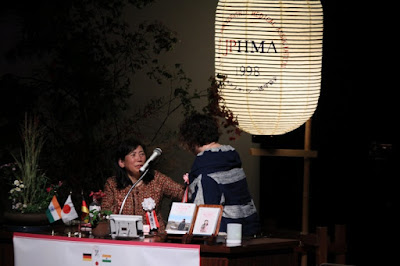 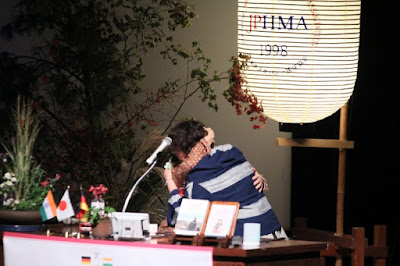 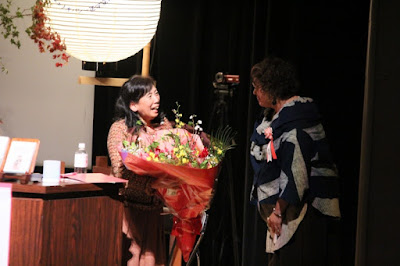 In the end of her presentation, she gave a big bouquet of cherry flower that is a memory of her son to Dr Yui as a sign of appreciation.

Dr Rosina Sonnenschmidt was invited as a guest speaker from Germany.
She gave a presentation under a theme ‘How to treat burnout holistically?’ on the first day of the congress.
She said there are many clients who suffer from burnout syndrome as German people also have a habit of working hard as Japanese people.
Clients who suffer from burnout syndrome are workaholic, have lost a life rhythm for a long time, cannot relax, and have bad sleeping pattern. As a result, their metabolism and physical functions have got dull, therefore many physical and mental symptoms are shown.
Dr Rosina treats burnout syndrome as cancer because the clients are caught by values, blame to their work and other people and sacrifice their life.
As this disease is difficult to identify and the pathology is complicated, breathing techniques, nutrition from fruits and vegetables, an approach to mind to give a hope of living in order to activate self-healing ability. 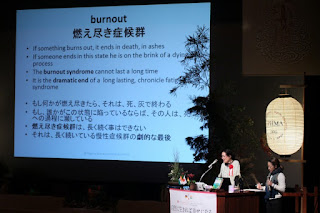 A practitioner is required to decide if it is liver-type or kidney-type by observing many symptoms of a client and choose homoeopathic remedies. Once the client’s vital force is recovered, it is important to give a treatment to release conflicts that the client has. As long as the conflict is not released, a cure will not happen. A holistic treatment is very important.
Dr Rosina concluded that a practitioner is required not only to prescribe homoeopathic remedies but also to see a client in a comprehensive manner. However, such homoeopaths are not so many. It is wonderful that Dr Yui formulated a method that  enable homoeopaths to see clients as a trinity. Life has rhythm. It is important to give not only homoeopathic remedies but also rhythm of music and dance and words with love. 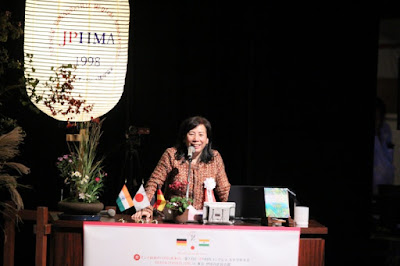 Concluding remarks for the 1st day

When I think back, we had many bashings (attacks) like from Asahi newspaper and it took such a long journey to reach here. Although we had many difficulties, it is wonderful that homoeopathy is still remained in Japan.
I listened to juniors’ case presentations with wonderful results. One of them was curing cancer. I thought it was wonderful. Even clients suffer from intractable diseases, they can keep having hope. It’s wonderful that homoeopathy has a solution. I could also feel that everyone loves homoeopathy. I am wishing that everyone lives their own life. I also wish myself to do so.
It was also excellent that Rosina gave us such wonderful performance. I believe everyone had findings from today’s presentations. I was so glad to have exchange between homoeopathy lovers. See you tomorrow! 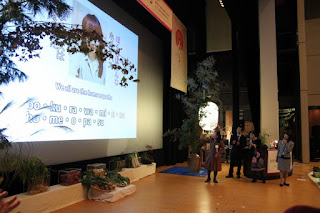 We concluded the first day with singing ‘A song for homoeopath’ after the fruitful day.